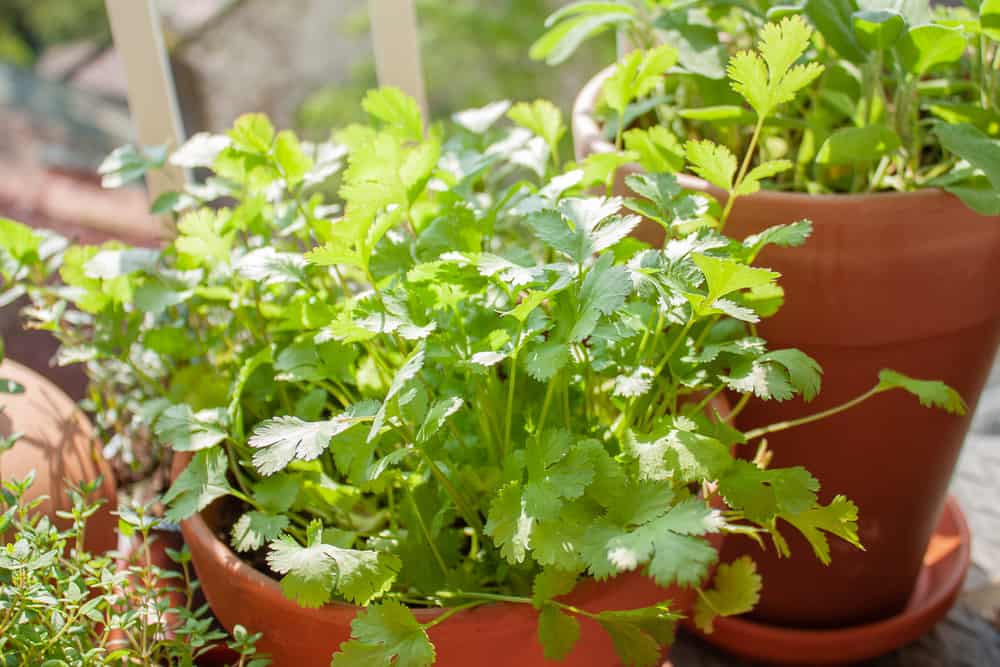 Cilantro (or coriander) might not be to everyone’s tastes, but it makes a good companion plant for balconies. As such, there’s a pretty extensive range of cilantro companion plants for attracting insects, deterring pests, and more.

Let’s go over some of the best (and worst) companion plants for cilantro.

Dill and cilantro work well planted alongside each other. However, dill doesn’t provide any direct benefits to cilantro. Instead, they both attract insects when they flower, and their aromas deter some pests. A simple herb planter (like this) will do the job perfectly.

Peas and other legumes are great companion plants for cilantro. It’s a pretty heavy nitrogen feeder, and legumes put nitrogen back into the soil. For this, they’ll need to be in the same pot, so a trellis planter (like this) will be best.

Cilantro actually helps potatoes, rather than the other way around. It attracts predator insects that eat potato beetles, keeping your precious crop safe. You don’t need to plant them in the same pot for this.

Tomato provides shade for cilantro, which can wither in too much direct sun. Tomatoes, however, love this weather. Keeping your cilantro shaded also stops it from bolting, meaning going to seed. You can then get more use from it throughout the growing season.

Unsurprisingly, other herbs make great companion plants for cilantro. This is because there are many that like the same growing conditions (lots of water and sun). You could plant cilantro in the same soil as:

What Not to Plant with Cilantro

There are also some plants you should avoid keeping near cilantro, such as:

Fennel is allelopathic, meaning it affects the growth of other plants. It’s basically a no-go for any balcony garden, but this probably isn’t a massive loss.

Rosemary and thyme are Mediterranean herbs, meaning they like lots of sun, sandy soil, and drier weather. In short, they prefer the complete opposite of cilantro. Growing them together won’t kill the plants but it’ll definitely mean you won’t get the most from either of them.

There are plenty of other herbs that fall into this category, such as oregano. Just check the growing conditions to work out what you can keep together.

Much like rosemary, the biggest issue with lavender is that it prefers different growing conditions. It likes sandy soil with less water, which would impact the cilantro.

Cilantro is pretty easygoing in most balcony gardens. Choosing the right variety will depend on what you want it to do, though.

For example, if your cilantro companion plants benefit from predatory insects, choose cilantro varieties that bolt easily. But if you want the cilantro itself for cooking, go with the opposite.

Either way, choosing the best cilantro companion plants isn’t difficult because it works well with almost anything you’ll grow in a balcony garden.