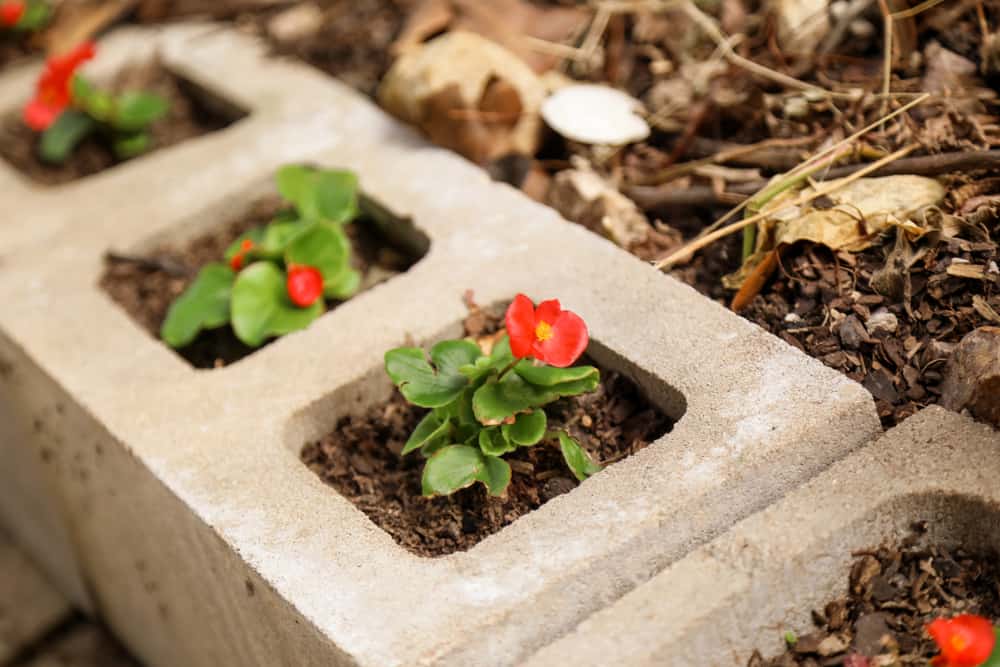 Cinder block planters are an inexpensive way to fill your garden with plants. As you can probably imagine, some plants work better than others. So, on that note, here are some of the best cinder block plants to use in your garden.

Getting Started with Plants in Cinder Blocks

There’s not a ton to think about before choosing cinder block plants. Your average cinder block is 16x8x8 inches. As such, the holes are roughly 5.5 inches square each. So, treat them the same as a 6-inch plant pot.

The arrangement and style of your cinder block planter might impact what you can plant in it, but this is a good enough estimate to work with. The only other thing to consider is that cinder blocks are fairly porous, so either choose drought-tolerant plants or be prepared to water them regularly.

Finally, just use all-purpose potting soil for this project.

Strawberries make great cinder block plants because they don’t need loads of room to grow. What’s more, as they send out their runners, you can fill up the rest of the planter. This looks amazing in a cascading planter.

Not all herbs work well as plants in cinder blocks, but there are enough that we can group them together. The best are:

Arugula is happy in confined spaces, so a cinder block is pretty much perfect. Plus, each plant is fairly small, so it’s easy to use them as plants in cinder blocks. By extension, spinach works well too because it follows the same principles.

Carrots might be an interesting choice as plants in cinder blocks, but it’s perfectly possible. Just focus on smaller carrot varieties, such as Chantenay, and you shouldn’t have any problem growing them in cinder blocks. However, you might be restricted to one carrot per hole, so it won’t be the most efficient use of space.

Petunias are great plants in cinder blocks because they’re easy to grow and don’t need loads of root space. If grown in the equivalent of a 6-inch pot, you shouldn’t expect them to get too big. But you can compensate for this by having loads of them.

Similar to carrots, radishes work well as cinder block plants. They’re typically smaller than carrots, so you could squeeze a few in each cinder block.

Marigolds work well as plants in cinder blocks because they don’t need loads of root space. Plus, they’re popular companion plants, so will work well in a cinder block planter that contains some of the crops mentioned above.

Garlic – as well as scallions – is suitable for cinder block planters, providing you don’t squash them in too hard. For garlic, you’ll probably want one bulb per hole, whereas you could plant 2 or 3 scallions per cinder block hole.

In the same way that arugula and spinach work as plants in cinder blocks, you could use pretty much any kind of lettuce. They have fairly shallow roots, so lots of small cinder block holes will be ideal as a lettuce garden.

There are plenty more cinder block plants that would work in a backyard planter. Hopefully, this list has given you some indication of the kinds that would be suitable. Happy planting!

8 Ways to Create Shade for Plants (and Why)