Everything to Know About Composting on Your Balcony 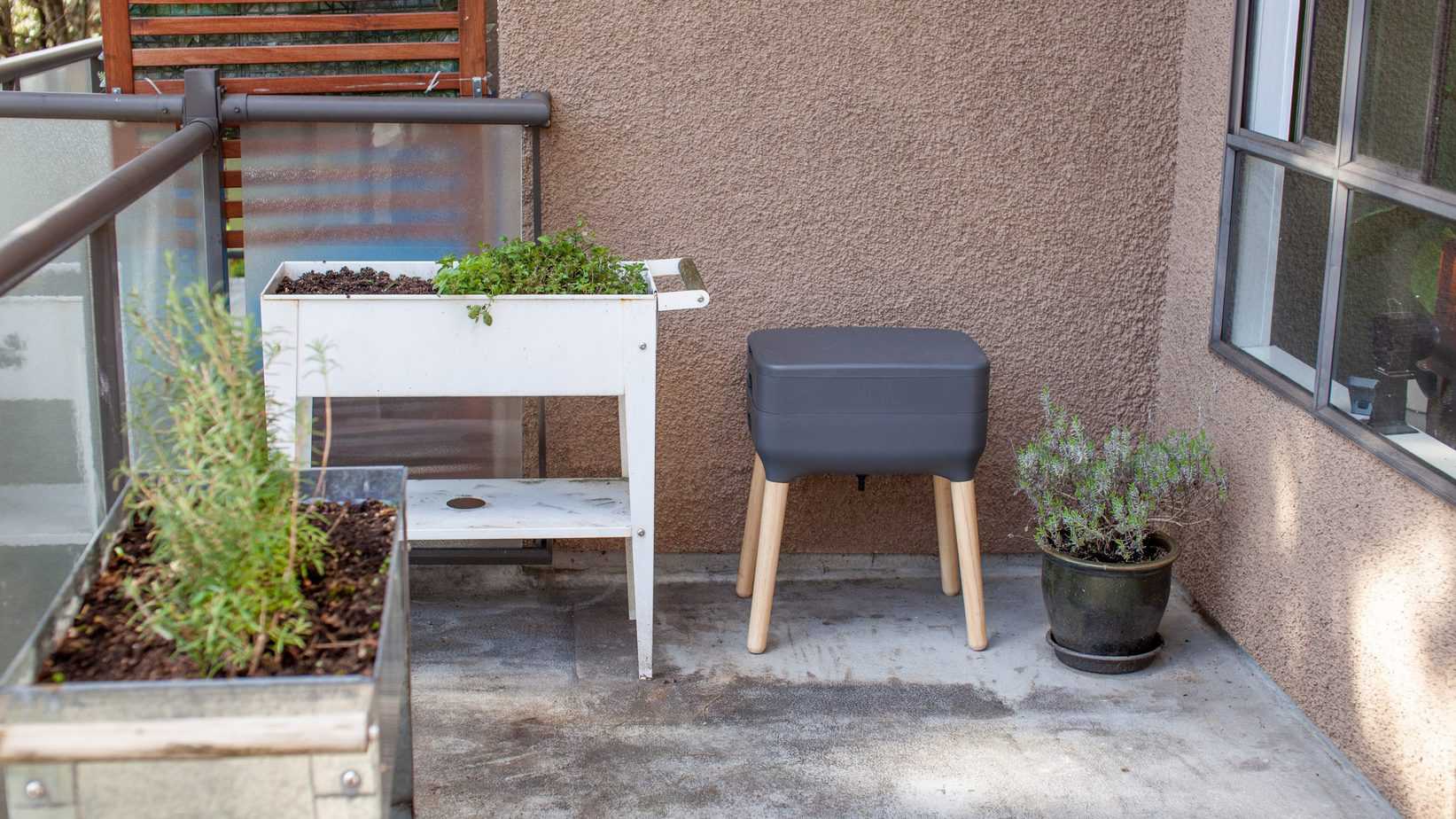 Living in an apartment or condo doesn’t mean you can’t do your bit for the planet. It might surprise you, but apartment composting is a fast-growing trend with loads of benefits.

But how do you start a balcony compost bin? Is it possible to compost in a small space and what benefit does it offer? In this article, we’ll discuss how to compost in an apartment to answer these questions.

Why Compost in an Apartment Balcony?

Composting is the process of turning organic waste into usable soil. A standard compost bin is self-sustaining because the breakdown process produces enough heat to keep the microorganisms alive.

For apartment composting, you need to think outside the box slightly because you’re more limited on space.

Before we discuss options, though, here are the main benefits of composting.

Sending your food scraps to landfill is completely unnecessary and is a significant contributor to methane emissions.

Some areas offer food waste collection but you might have to pay for this. Instead, with a small investment, you can do it at home and save the extra expense for both yourself and local services.

Composting at home also saves plenty of CO2 compared to a collection service. This alone should be enough of a reason.

If you’re a plant parent, the benefits of composting in your apartment should be obvious. Compost is nutrient-rich and your plants will love it. Plus, it saves you having to buy soil, which is organic waste that someone else has composted.

It’ll help you to reassess your waste

This is an indirect benefit, but setting up a balcony compost system will help you realize how much you’re wasting, often unnecessarily. You don’t think about it when just throwing it in the trash. But you might think twice when you see just how much you throw away.

When composting in an apartment balcony, you’re often restricted by space. This means you have to be more intelligent about the method you choose.

There are some super simple methods or more complex setups. With the right system, you could even compost inside your apartment without any smell.

Here are some of the main options for apartment composting.

One of the simplest systems is just a bucket with worms in it. Over time, the worms break down organic matter and release worm castings, which are great for soil quality.

For this method, you’ll need:

If you want to know how to compost in an apartment, this is the general method:

That’s pretty much it. You can buy dedicated worm composting bins online that do most of the work for you.

But it’s easy to set up an apartment composting with worms system for next to nothing.

The easiest method for a balcony compost bin relies on bacteria to break down organic matter. It’s possibly the slowest method but you only need a bin and food waste to start.

Bacteria need water, air, and food to grow. So, drill some holes in a large bin, add food waste, and spray with water. That’s basically it.

Adding leaves or soil helps to reduce the smell, although there shouldn’t be much odor anyway. Once it’s established, you won’t need to add more water.

If you want a DIY compost bin for your apartment, this is the best option. You don’t need much to start and can use any large container you have lying around.

Bokashi is the Japanese word for “fermented organic matter”. It’s the fastest method of composting but needs a microbe mix to work properly.

Also, you’ll need a sealed container because it’s fermentation rather than decomposition. Start with a large container (5 gallons or so) and add a layer of organic matter.

Then, add some starter and leave it for 2 weeks. After this time, mix it with soil and it’ll finish breaking down.

If you want to do composting indoors and have some money to spend, consider using an electric composter.

Electric composters dry and grind organic matter rather than decompose it, meaning it’s better for indoor use. They don’t produce any smell during the process and will give you compost in a matter of hours.

Of course, it’s not as green as other methods because it uses electricity. But, if you don’t have a balcony and want to compost, it’s a good option.

Setting up a balcony compost bin isn’t difficult but there are some things to consider first.

These will dictate the method you use and the size of your setup.

1. How much food waste do you produce?

The more people in your home, the more food waste you likely produce. For families, you’ll want as big as you can get.

But for couples and single people, a small compost tumbler should be enough.

Depending on your method, food waste can take up to a year to break down. So, bear this in mind when choosing the size of your container.

2. Do regulations allow it?

There’s no reason why composting shouldn’t be allowed but check with your building regulations first.

You might be limited in what kind of method you use or restricted in what you can compost. It never hurts to be certain.

3. How much space do you have?

It’s probably not worth taking up your whole balcony with a composting system. If you’re limited on space, the bokashi method might be best because it doesn’t need much space.

Alternatively, using a 10-gallon container for your DIY compost bin apartment setup should be fine, and won’t take up much space.

You can use compost for plants or for balcony food growing setups. But, if neither of these apply to you, what can you do with the compost?

See if a local community farm will take it off your hands. Another option is to sell it yourself to local gardeners. You never know, it could become a good side hustle!

Composting in an apartment balcony is simple to set up but can be difficult to get right.

Understandably, you might have some questions and concerns. Here are some important FAQs related to apartment composting.

Done properly, composting shouldn’t smell much. It should have a slightly sweet, earthy smell. It might be a bit stinky for the first few weeks but after that it’ll calm down.

If your balcony compost bin does smell, it could be for the following reasons:

What can’t you put in a balcony compost bin?

There are some limits on what you can compost. If doing balcony worm composting, your options are slightly less limited.

As a general rule, avoid:

Dairy is fine but can make a compost bin smell. Meat does break down but can carry harmful bacteria, which can transfer into the soil and then into your home. It’s best to just avoid it.

If your balcony compost bin does smell, add some soil, newspaper, wet leaves, or sand. This helps to reduce the smell until the organic matter breaks down.

What can you put in a balcony compost bin?

You can use pretty much all food waste when apartment composting. Some guides suggest not adding things like citrus peel or eggshells, but once your compost bin is up and running it’ll break down most things.

However, one vital rule is to get the right mix of green and brown matter. Green matter is food and garden waste and is high in nitrogen.

Too much nitrogen gives you thick, sticky compost. Adding brown matter gives it bulk and dries it out. You’ll be able to tell if the balance is off.

Finding brown matter might prove difficult but you can use things like scrap paper, kitchen paper, and so on. Ideally, the mix should be about 60/40 green to brown.

Hopefully, this guide has given you some useful tips on small space composting. It’s super easy to make a DIY compost bin in your apartment with a container and some food scraps.

Over time, you’ll learn best practices for your balcony compost bin. It doesn’t take long to understand the magic of soil, and you’ll soon be obsessed with getting the right balance!

How to Keep Bugs Away from Your Balcony