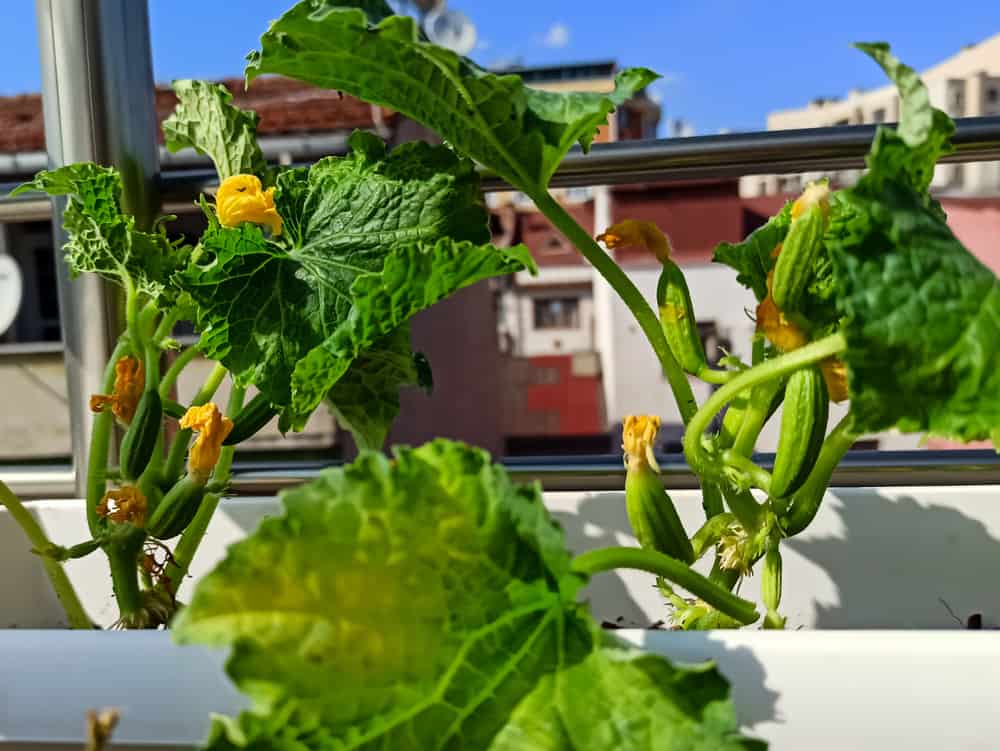 Companion planting is an ancient technique that involves growing beneficial plants together. This could be to attract pollinators, prevent weeds, provide support, or for many other reasons.

In this article, we’ll look at pumpkin companion plants. For the most part, we’ve aimed this at growing pumpkins in smaller spaces, but there are some classics that can’t be ignored.

Although we’re mostly looking at compact plants, we can’t overlook corn as a pumpkin companion plant. Combined with beans, these make up the Three Sisters. Corn provides support for the beans, and pumpkins prevent weeds. Of course, you’ll need a lot of room to set this up.

Marigolds are a popular companion plant for all kinds of vegetables. They help prevent root pests and pollinators like them, too. To get the most benefits, they need to be planted in the same soil as the pumpkins. A large planter like this would hold both plants, providing you grow the pumpkins vertically.

Lavender is a pollinator’s dream, making it a good pumpkin companion plant. Pumpkin flowers aren’t super attractive, so lavender helps draw in the bugs. They don’t need to be in the same pot, nearby will be fine.

There are few better companion plants for pumpkins than nasturtium. It helps repel squash bugs while also attracting good insects, such as ladybugs. Nasturtium is known as a trap crop, meaning it draws pests away from your actual crops. Better still, you can use both its leaves and flowers in salads.

Like lavender, sunflowers are good pumpkin companion plants because they attract pollinators. If you’re growing trailing pumpkins, adding sunflowers to a large planter (like this) with the pumpkins will add a bit more interest.

Korean licorice mint isn’t a super common plant, but it works well with pumpkins. It’s a favorite of hoverflies, which are the natural predators of a range of pumpkin pests. You can also eat the leaves – they taste of aniseed.

Numerous herbs work well as companion plants for pumpkins, including:

They attract pollinators, and it’s gardening legend that marjoram planted among pumpkins will make them taste nicer.

What not to Plant with Pumpkins

Knowing what not to plant with pumpkins is pretty easy. The main thing to avoid is root crops, such as:

The biggest issue is that most of these are ready to harvest before pumpkins, meaning you risk destroying the plants’ root systems when digging them up. They’ll also compete for nutrients, as they have similar planting and growing cycles.

You should also avoid brassicas (cabbage, broccoli, etc.) because they compete for the same nutrients as pumpkins.

Finally, try to avoid other cucurbits. This is the family that contains trailing plants like gourds, cucumbers, zucchini, melons, etc. Cucurbits follow the same growing patterns, meaning they’ll compete for space, both above and below the soil.

It won’t be as much of an issue if you’re growing them vertically in pots, but bear it in mind for planting in raised beds. Also, there’s a chance of cross-pollination, which will affect your seeds for the following year. This isn’t an issue for everyone, of course, but it’s worth mentioning.

So there you have it, the perfect companion plants for pumpkins. Most of these will work well in smaller outdoor spaces because they don’t need to be in the same soil as the pumpkins.

Also, if you’re growing crops in pots on a balcony, you can basically ignore all the information on what not to plant with pumpkins. Happy growing!