7 Safe and Stylish Ways to Decorate a Fire Escape 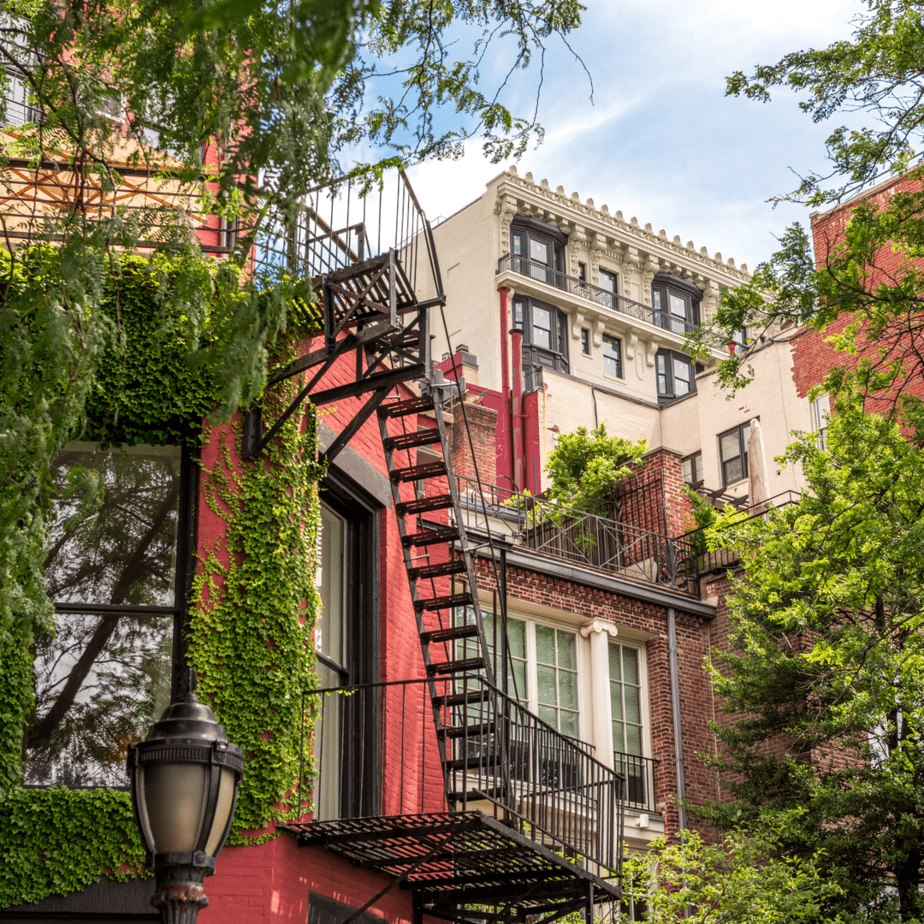 If you live in an older apartment building, the chances are pretty good that you have a fire escape balcony. While fire escapes were common years ago, they are now basically relics, as fire safety regulations have changed substantially since their introduction.

Most of us agree that they’re ugly additions to buildings. If you’re in this camp, here are some fire escape decorating ideas to make yours look a bit nicer.

External fire exits were first patented in the US in the late 1800s and became increasingly popular through the 20th century. However, from the 1970s onwards, fire safety regulations improved, and now you won’t find external fire exits on new-build apartment blocks.

While they’re something of a cultural icon, external fire escapes really aren’t fit for purpose. Even so, older apartment blocks still use them because they lack the internal space to build new fire-safe stairwells.

But why would you want to decorate your fire escape balcony? Simply put, they’re ugly. You’ll often have one in place of an actual balcony, so it might be the only outside space you have in your apartment. Decorating it can at least make it look a bit nicer.

What to Consider Before Decorating Your Fire Escape

As you can imagine, there are a few things worth considering before you whip out the fire escape décor. Here are the highlights.

While there are no specific federal laws about fire escape decoration, your state, city, and building likely have rules. The easiest place to find them will be in your rental agreement/HOA manual, as they’ll adopt the highest authority rules.

They’ll usually come down to you not obstructing the fire escape balcony at any time. This might seem limiting, but there are ways to work around it.

You’ll also want to consider how old the fire escape balcony is. An aging metal fire escape could be rusty, meaning it can’t hold too much weight. If so, you’ll probably want to avoid setting up a seating area or something.

But, if you already sometimes sit on your fire escape balcony, chances are it can take a bit more weight. Do a thorough inspection first and consider speaking to your building super if you’re unsure.

Hanging plants are a good way to make your balcony look nicer without compromising safety. You can hang them from railings or perhaps the floor above, providing they don’t get in the way.

Alternatively, you could use adhesive hooks to hang them from the building itself. This’ll stop them from getting in the way while still looking nice.

If you often sit at your window on the balcony, adding some lights can make it a bit more inviting. Wrapping string lights around the railing adds ambience without being obstructive.

Use battery powered lights so you’re not running a power cable into your apartment. It’s never a great idea, but it’s particularly bad on a fire escape balcony.

A fire escape garden is perfectly possible, providing you’re clever with how you set it up. Sure, you won’t be growing enough to feed yourself, but you could easily grow some small fruit plants (such as strawberries).

You could always try growing herbs in your fire escape garden. They don’t need much room and provide some of the best return on investment in small spaces.

As far as fire escape balcony ideas go, this is an interesting one. If your fire escape has stairs rather than a ladder, try setting up a reading nook on the mid-floor landing. On warm summer evenings, with some string lights on, it’d be a great place to sit.

All you’ll need is some comfortable outdoor cushions, and maybe a blanket. Importantly, it should be temporary stuff that you can take back inside with you, so you don’t obstruct the stairs.

5. Set up a Coffee Shelf

Did you know railing shelves are a thing? Well, they are! As the name suggests, they’re shelves that sit on balcony railings. As such, they don’t obstruct the floor but still give you somewhere to put your drink.

We’ve got a full guide on how to build a DIY balcony railing bar, so check that out for instructions.

They’re not the biggest things, but they’re perfect for holding a coffee or dinner plate (or wine glasses) if you’re enjoying your fire escape balcony. And, when they’re not in use, you can easily fold it down.

This is a bit of a cheat, but if you have strict rules about fire escape décor, decorate the walls instead. You could hang some vintage signs, paint, use wall stencils, or hang a flag. Sure, it’s not an amazing solution to fire escape decorating ideas, but it’s better than nothing.

If your fire escape balcony is large (and strong) enough, try setting up an outside seating area. It must be temporary, so you can remove it in an emergency and take it back inside when not in use.

As such, you’ll want a folding table and chairs so they’re easy to store. Consider buying a nice outdoor rug to make the metal floor a bit nicer to stand on, too.

It’s really pushing the limit of fire escape decorating ideas, but try putting down some decking tiles. They’re rubber, interlocking tiles that look like wood. You can simulate a nice balcony with them and can remove them whenever necessary.

Hopefully, this article has given you some inspiration for fire escape decorating ideas. Remember, nothing you do should permanently obstruct the fire escape. While this is limiting, it’s still possible to have a cute and interesting fire escape balcony.

How to Select Artificial Grass for Your Balcony or Outdoor Space

Balcony Boss is reader-supported. When you buy through links on our site, we may earn an affiliate commission.